This year will mark my 11th straight trip to the Michigan Summer Beer Festival in Ypsilanti (Oooooooh, big MAN!).  My first year, it was held in Frog Island park, a smaller venue that’s only maybe a 10-minute walk from the current location in Riverside Park.  The crowd was much smaller then, as was the number of Michigan breweries that existed at the time.  However, it only took about 1.6 seconds after walking through the gates before I was completely hooked.

As a 100% self-admitted Michigan beer honk, typically my summer calendar is arranged so that I do not under any circumstances miss this event.  One might even go so far as to say it’s the highlight of my summer (“one” being ME).  In case you haven’t figured it out, I LOVE THE MICHIGAN SUMMER BEER FEST.  There, I said it.

Lately, i’ve read and heard comments from people about their hesitation in returning to the event.  Complaints have ranged from “It’s too crowded” to “it costs too much” and even “the beer’s too delicious” (okay, I made that one up).  I can understand these concerns, so therefore let me first address them and then brow-beat people for having such foolish thoughts in the first place.

I can understand the comments about the crowds – it seems each year the line to get inside the gate gets longer and longer.  However, I typically attend on Friday evenings because (A) it seems the crowds are smaller, (B) the evening time slot means less heat and sweat, and (C) I’m usually “done” after four hours anyway, if ya catch my drift.  So if you’re turned-off by the large crowds on Saturday, then stop whining and get down there on Friday – sheesh.  (For the record, I attended on Saturday last year for the first time in several years and yes the line to get in bordered on ridiculous, but it moved quickly and the crowd dispersed once you got through the gate).

Next, let’s address the cost.  Tickets on Friday are $30 in advance / $35 at the gate (if available) and Saturday is $35 in advance / $40 at the gate (again, if available…and I wouldn’t count on it, pal.).  I can understand in today’s “challenging” economic climate that there are most certainly cheaper ways to drink beer.  However, I find it’s best to shut-off the part of your brain that wants to rationalize the expense, and instead hand over your pocketbook to the part of your brain that thinks “Good heavens, just LOOK at the number of breweries and beers that will be at my disposal!!”  Trust me, you’ll be glad you did.

So in closing, hopefully i’ve squashed any silly thoughts you may have had about not attending the social event of the year for Michigan beer slappies.  Sure it’s a tad crowded and sure it’s a tad pricey.  But in the end, it’s all about the beer – and namely, the chance to hang out with other beer lovers drinking incredible Michigan craft beer in a picturesque setting in the beautiful Michigan sunshine (unless of course you remember 2010). 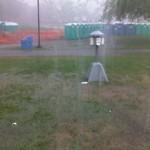 The Friday monsoon at the 2010 Michigan Summer Beer Festival.